Snap the Rag for a Tip -A good story!

After my presentation for the Greater Detroit Area Health Council at the Westin Hotel in Southfield MI, I passed an impressive shoe-shining stand. I wanted to sit upon that throne before taking a cab back to the airport for my next lecture in Birmingham AL. After changing into jeans and the leather cowboy boots I was wearing for my evening activities in the south, I was prepared to jump up into one of those large leather upholstered seats with curved wooden armrests. The shoe-shiner stopped me and placed his sturdy shoe-shining box at my feet for a smooth step up to the throne.
I didn’t pull out my cell phone to make use of the time. I began a conversation with Ricky. He’d been shinning shoes for almost 32 years. His friend died recently and his friend’s wife wanted to get rid of everything in the garage. Ricky and his buddy bought all the items for $500. The buddy took the dining room set and sofa to furnish the new apartment he moved into with his girlfriend, while Ricky got the shoe-s 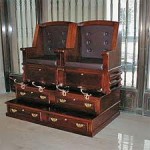 hining throne that had been collecting dust in the garage for 16 years.
Ricky set up the throne at the hotel. In exchange for offering the service, they gave him the space. He worked there everyday from 7-7. One of his regular customers, a lawyer with a nearby office, suggested he strip the black paint off the arm rests because it seemed that the origin

al wood was worth restoring. It was not an ordinary Oak, but a unique oak wood that was hidden by the black paint. In addition, Ricky had the seats re-upholstered. The upholsterer offered him $10,000 for the throne, but Ricky knew if he was offering that, it was probably worth double. Smart man!
For the final shine, Ricky drew the cloth masterfully over the toe of my boot, making a sharp popping noise on every other stroke. “That noise is pretty fancy, how do you do it?” I inquired. He explained it was a flip of the wrist. “Do you need to do that for a good shine?” I asked. He explained that in the old days, if you didn’t ‘Snap the Rag’ you didn’t get a tip.
He charged $9 for boots. I gave him a $4 tip for the entertaining rag-snapping.