When I mention to people I had oral cancer, very often I am greeted with a dumbfounded expression and the comment, ‘Huh? That’s a thing?’ My eyebrows rise, my head tilts, I flash an all-knowing grin and nod. It’s so remarkable that one can get cancer in the mouth, people genuinely want to know more and ask, ‘What were the symptoms?’

It started with a sore on the left side of my tongue. An unusual place for what seemed like an ordinary canker sore. After 4 weeks, an oral surgeon concluded it was nothing serious, after all, I never smoked and rarely drink common causes for irritation in the mouth. Like any canker sore, it hurt. ‘If it bothers you so much,’ the doctor stated, ‘we can remove it.’

“Great, just remove it,” I replied, ecstatic this painful irritation would be eliminated.

Two days later, it was inconspicuous. After two weeks, I forgot about it completely except for a call from the oral surgeon’s receptionist who told me the biopsy results were negative. Confused, I asked, “Are you calling the right patient?” 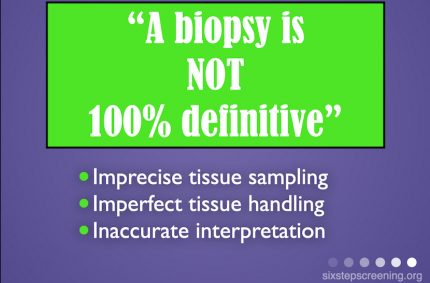 “The oral surgeon took tissue from your tongue, correct?” she questioned.

“Yes, but I didn’t know it was being biopsied.” I thought to myself, ‘What could they possibly be looking for in a biopsy of the tongue?’ But my questions were all but forgotten when she assured me I had nothing to worry about. I regret not asking for examples of what would be problematic which may have ultimately saved me from the extensive surgery and treatment that would change my life forever.

I had no obvious symptoms for two years, but early stage oral cancer is often asymptomatic. You don’t feel it or see it easily. The slowly mutating tissue morphed into another sore, directly over the biopsy site. Had I been educated about the signs and symptoms of this disease, if I knew it even existed, I could have been a partner in early discovery by watching the area.

Beware when a doctor says, ‘if it doesn’t improve, come back.’ For nine months, both dentists and two oral surgeons concluded each appointment with virtually the same instructions. They were leaving it up to me to determine if the lesion was improving. In essence, I was asked to self-diagnose. I was naive in regard to the insidious nature of the beast I was up against.

My dentists and oral surgeons were guided by a pathology report that was over two years old. Despite my ongoing complaints, no one thought to question the biopsy results. In a fatal twist of fate, we later learned the biopsy directing my care was misread from the beginning.

As I learned more about my disease over the years, one catastrophic mistake in my care was overlooking the fact that a persevering lesion in a non-smoker has a high index of suspicion for cancer. Alcohol and tobacco use irritates the oral mucosa. But, with no obvious risk factors, it was so easy to dismiss.

Instincts and gut feelings play an important role in your health care. More could have been done when I was desperately searching for answers, yet I allowed daily responsibilities to distract me from putting myself first and getting to the bottom of the problem sooner. If something isn’t right, never accept the ‘wait and watch’ approach. Second opinions are encouraged. First and foremost, rule out cancer, so it doesn’t become ‘a thing!’