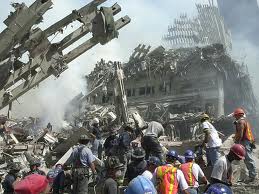 I met Chris O’Neill on the bus into NYC where I was giving a presentation at Hebrew Union College for Jewish educators on interactive storytelling techniques.  He had an appointment at my alma mater, if you can call it that, otherwise known as Mt Sinai Hospital where injured 911 rescuers are treated and monitored.  He was in construction and cleared the steel for the servicemen and their dogs to find bodies.  He was being followed for lung-related issues.

With the looming rush hour traffic, Chris and I shared our graft stories which led to his life story worth retelling.  At 25 with a 3 yr old son, he was in Central park, homeless, drinking and smoking pot.  A ‘church lady’ said to him, if you go away to prison, she would deliver a bible to him.  She gave him the number of the church.  He stuffed it in his pocket thinking to himself, “Yeah right. Sure she will give him a bible….NOT.”

Three days later, he was picked up and spent several years in and out of prison.  He did call the church.  She kept her word and delivered a bible.  Then, she became his pen pal offering encouragement and support.  When he left prison once and for all with one set of clothes on his back and $40 in his pocket, he walked from downtown Manhattan to uptown looking for a job.  A Polish construction company hired him because they knew he was a big enough guy to run a jackhammer all day.  They warned him that all the other workers are Polish and would he be OK with tbeing the only Puerto Rican.  Chris made it his business to learn Polish and began speaking to me in the language saying he never forgot it.

The church lady became a bigger part of his life.  She offered to help him if he promised to stay away from drugs and alcohol, which he did.  Eventually, he asked her to marry him, and they had two children over their seven years together.

We arrived in NYC right on time, despite the traffic, thanks to the dedicated bus lane that closes at 10AM.  I didn’t get to hear the end of the story, but I know Chris’s eldest son is getting a masters degree and he has a special ‘honey’ in his life that he plans on marrying very soon.  I think Chris has finally got it all right!